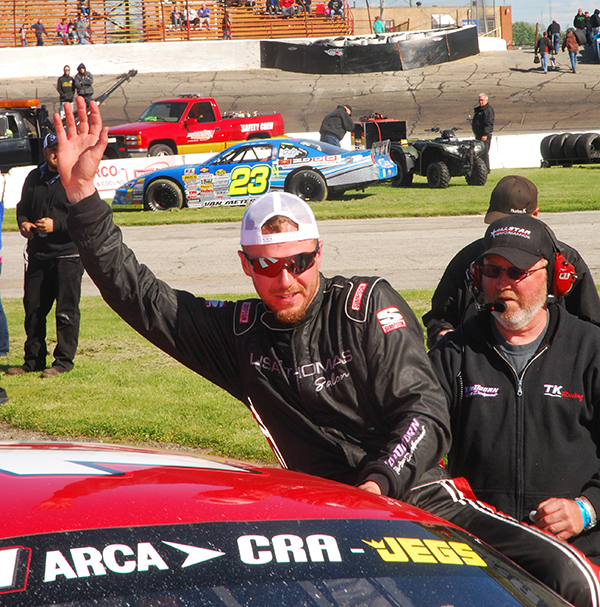 Michigan driver Johnny VanDoorn used a bump and run move with three laps remaining to capture the Koorsen Fire & Security 125 for the CRA Super Series late models at Anderson Speedway on Sunday.
VanDoorn worked his way from the ninth spot after pitting on lap 53 and was able to pass Indianapolis driver Eddie VanMeter with an inside move entering turn one on lap 123 on AERCO Heating & Air Conditioning day at the races.
With the victory, VanDoorn assured himself a starting position in the U.S. Short Track Nationals later this month at Bristol Motor Speedway.
VanMeter started from the pole position following the invert of the fastest seven qualifiers and was able to hold off VanDoorn for several restarts late in the race.
VanDoorn stayed glued to VanMeter’s rear bumper following a restart on lap 106 and finally made the move stick.
He did momentarily take the lead from VanMeter on a restart but it was negated when the caution flag waved for a spin by Jack Dossey III and Hunter Jack.
It was VanDoorn’s sixth win at Anderson Speedway in Super Series competition dating back to 2007.
Rookie Josh Brock finished third followed by Brett Robinson and Jack.
Kentucky driver Brett Hudson made only one mistake, but it cost him a victory at Anderson Speedway.
Hudson was dominating the Champion Racing Association’s Street Stock feature when the caution flag waved on lap 62 when Nathan Green spun in turn two.
That wiped out a half-track lead Hudson had on second place running Anderson driver Josh Poore.
On lap 68 Hudson drifted high entering turn three which allowed Poore to drive inside and take the point. Hudson was never able to close on Poore enough to challenge for the victory.
Mason Keller, Andrew Teepe and Josh Brading rounded out the top five.
Poore started fifth in the field and ran in the top four after the first ten laps. He passed Keller on lap 17 with an inside pass in turn one and moved around Brading for third on lap 20.
For the next 21 laps Poore chased Andrew Teepe for the second spot finally making the pass entering turn three with Hudson pulling away to a comfortable margin.
Pendleton driver Earl Adams was awarded the 100-lap Thunder Car feature win when apparent winner Charlie Thomas was disqualified for failing technical inspection.
The final 20 laps changed the entire outcome of the race when leader Jeremy Threet and Randy Hoppes, the only two cars on the lead lap at the time tangled with a slower car.
The incident ended the day for both Threet and Hoppes and put Thomas in the lead.
Adams moved into the second spot with 15 laps remaining and although he closed to the rear bumper of Thomas was unable to make the pass.
Following Adams to the checkered flag were Frankie Oakes, Rickie Tharp, Johnny Magee and Kyle Evans.