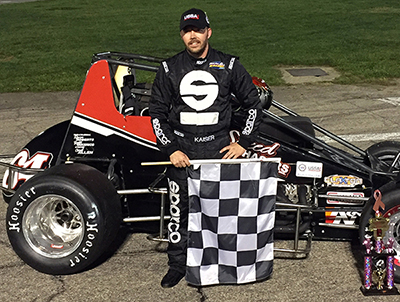 Geoff Kaiser got a wake-up call with five laps remaining when Donnie Adams Jr. almost made the pass for the lead in the USSA Sprint Car Challenge Series.

Kaiser led from the start on Paint the Night Pink sponsored by Star 106.9 and McGowan Insurance at Anderson Speedway but once Adams got into the second spot on lap 28 the battle for the point was on.

Both drivers were turning laps faster than their qualifying times with Adams getting a run to the inside on lap 45, but a lapped car prevented the pass.

Fast qualifier Grant Galloway used the chrome horn to pass Welpott for second on lap 20 in turn three. Welpott pushed up the track which allowed Donnie Adams Jr. to move to third.

Galloway started to challenge Kaiser for the point when he lost a left rear tire on the front straight on lap 28.

Austin Tunny took advantage of a restart with four laps remaining to pass Mike Hadley Jr. to score the victory in the Interstate Auto Auction World of Outlaws Figure-8 Series.

Hadley took the lead on lap eight with a pass of Mike Riddle Jr., but the late race caution wiped out the big lead that he had amassed.

Tunny started last in the field his qualifying time was disallowed for a tire issue.

Tunny battled with Riddle for 35 laps for the second spot, finally making the pass with an inside move entering turn one.

With his second place finish Hadley made it back-to-back championships. Riddle finished third followed by Jeremy Vanderhoof and Dennis Whisman.

Dameron Taylor finally beat his nemesis Kyle O’Gara at Anderson Speedway by making an inside pass on lap 28 entering turn one to record the victory.

The last time the Mel Kenyon Midget Series was at Anderson, O’Gara nipped Taylor at the finish line by four-thousandths of a second.

O’Gara won the championship just by starting the race on the strength of 12 feature wins in 2015. Ryan and Logan Huggler finished third and fourth followed by Clayton Gaines.

Zach Tinkle made it two consecutive wins at Anderson Speedway in CSR Mini-cups action completing a clean sweep of the competition.

Tinkle set fast time, won his heat race and then led 20 of the 25 lap feature.

He passed early leader Steve Naples with an outside pass on lap five entering turn three and dominated the rest of the race.

Kenny Smith charged from the back of the pack after spinning while in the lead with six laps remaining to score his second Indy Fast Carts win of the year.

Smith passed Jason Reynolds with an inside pass entering turn one and pulled away for the win.