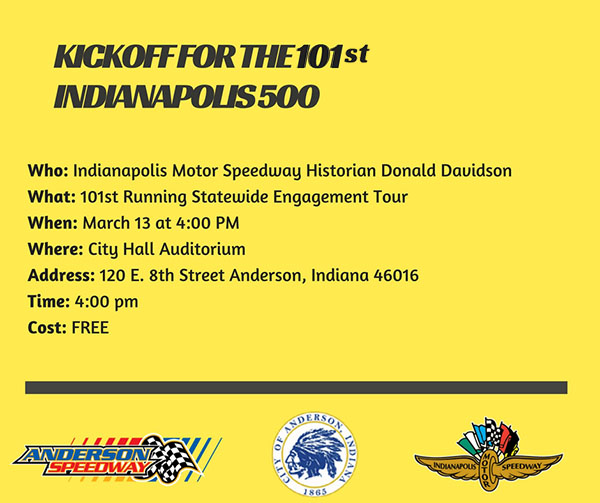 The Indianapolis Motor Speedway Midwest Engagement Tour will visit Anderson, Indiana on Monday, March 13, previewing the historic 101st Running of the Indianapolis 500 Presented by PennGrade Motor Oil. Fans will receive a special chance to interact with IMS historian Donald Davidson, believed to be the only full-time historian employed at any race track in the world.

The event begins at 4 p.m. at the Anderson City Hall Auditorium.

The Q&A session will take place March 13 at the Anderson City Hall Auditorium at 4 p.m. The event is free and open to the public on a first come first serve basis. Light appetizers will be provided to guests. This event will highlight the exciting racing happening at Anderson Speedway and the Indianapolis Motor Speedway during May.

As a special giveaway, Donald is bringing Month of May tickets to give to some lucky fans!