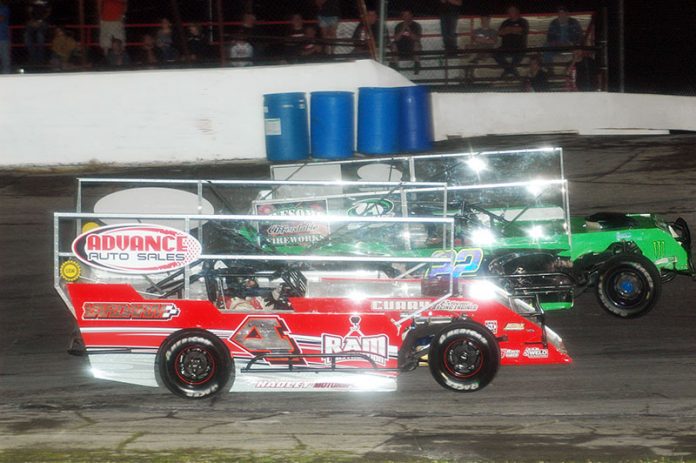 One of the marquee events at Anderson Speedway is set for Saturday, August 9 when the 65th National Crown will take place featuring the Winged Outlaw Figure 8 Series (WOFS). The Front Wheel Drives Figure 8′s, Thunder Roadsters and Vore’s Compact Touring Series will also be in action.

The 65th annual National Crown will feature the most laps and biggest payday for WOFS competitors. It is quickly becoming a fan favorite amongst Figure 8 fans in the area, as well as across the country, after its switch to an Outlaw Figure 8 race three years ago.

The National Crown began way back in 1950 at the famed quarter mile Anderson Speedway. Although the format has changed over the years, the event has carried on each year since the very beginning. The original format was a 300-lap hard top stock car event. The current version is a 100-lap event sanctioned by the WOFS.

The famed Daytona 500 celebrated its 56th running this past February. But, the National Crown will celebrate its 65th running this Saturday, giving the event the distinction of being the nation’s oldest continuously ran stock car event.

Anderson Speedway has held some pretty big events over the years including the annual Pay Less Little 500 sprint car race and Stoops Freightliner Redbud 300 late model event. To the locals, the National Crown is as big as it gets.

The inaugural event was a 300-lap hard top stock car event that was won by Herschel White in 1950.

The 2013 version was an exciting event featuring a good car count as well as crowd. Jeff Shackelford held off several challenges to score the biggest win of his racing career. Shackelford became another new winner of the National Crown and solidified the night with proof that the National Crown is once again alive and strong.

A strong field of competitors is expected Saturday including Chris Green, Ben Tunny, RJ Norton Jr., and Gary Bedell among others. No less than two former National Crown winners are expected including Shackelford and Mike Riddle Jr.

Mike Hadley Jr. has been the hottest driver in WOFS competition in 2014. Hadley is coming off a win at Kentucky Motor Speedway in Whitesville, Ky., this past Sunday night and is expected to vie for his first National Crown win. Hadley gained the WOFS points lead after the April 5 opener, and has yet to relinquish it.

In the Front Wheel Drive Figure 8’s, Randy Owen has constructed a 49 point lead over Kamden Creek with Jeff William listed in third position. The remainder of the top five includes Elliott McKinney and Randy Hoppes.

The Thunder Roadsters will make their seventh appearance at Anderson Speedway. Feature victories have been claimed by John Robbins (3), Chris Weddel (2) and James Edsall lll.

A second event is on tap for the Vore’s Touring Compact Touring Series. In the debut at Anderson in June, Chris Jennings took the feature victory over Jason Timmerman and Rodney Sutton.

On Saturday, August 9, spectator gates open at 5 p.m. with the racing beginning at 8. Admission is $12 for adults and $4 for kids ages 6-12. Children five and under get in free.