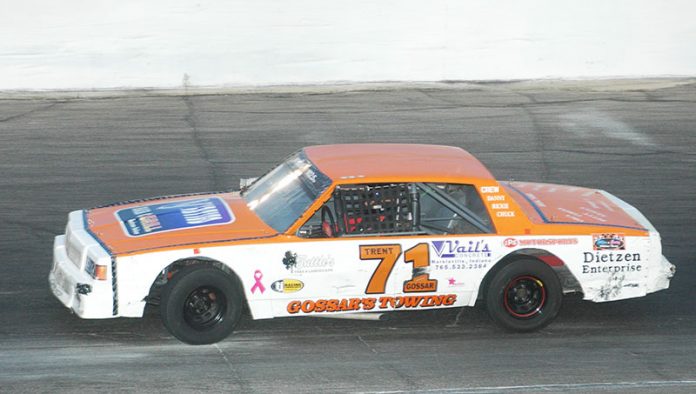 Making his first start in the NASH-FM Thunder Car feature in more than two months, Trent Gossar scored his second win of the year.

Gossar took the lead at the green flag chased by Randy Hoppes and Curtis Chapman.

For the second consecutive week point leader Robbie Wyman tangled with another car that knocked him out of contention for the win.

On the second lap Kyle Allmond suffered a flat tire coming off the fourth corner and collected Wyman, who was forced to the tail after changing a flat right front tire.

Defending series champion Curtis Chapman passed Hoppes on the restart with an inside move going down the back straight.

Although Chapman was able to stay locked on Gossar’s rear bumper he was never in a position to take the lead and the win.

Lonny Burton finished third followed by Hoppes and Wyman, who passed Austin Russell on the next to last lap.

“It feels good,” Gossar said of the win. “We lost a motor and transmission during the year. It feels good to get back and be in the winner’s circle.”

When asked about Chapman running on his rear bumper for most of the race, Gossar said he didn’t know how close he was.

“He raced me clean all night,” he said of Chapman. “There was no bumping and I never saw his car.”

Gossar also won the heat race for the fast qualifiers leading all the way with Burton, Chapman and Wyman following him to the checkers.

Allmond back in two consecutive heat wins never surrendering the point with Randy Hoppes closing at the finish of the race.

Hoppes made a nifty inside out move on lap three to go from fourth to second by passing Bruce McFall on the outside and then Austin Hawkins on the inside racing down the back straight.

By that time Allmond had opened a substantial lead. Austin Russell came home in third with Jimmy and Austin Hawkins rounding out the top five.