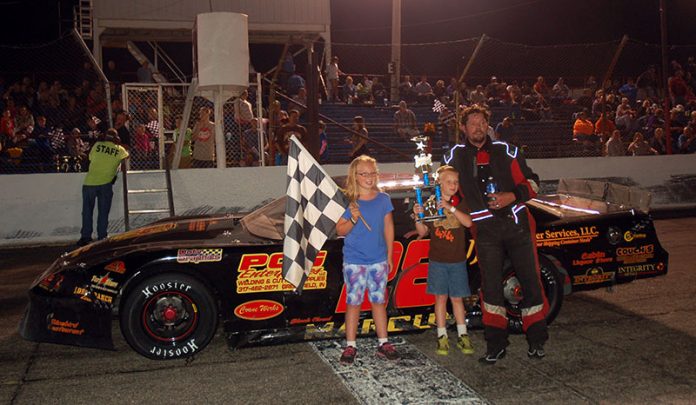 Morristown driver Jeff Marcum has watched victories in the McGunegill Engine Performance Late Models slip away this season, but that changed Saturday at Anderson Speedway.

There were 20 late models on hand with the top 13 in qualifying separated by a half-second.

Marcum inherited the lead on lap 19 when Kent Baledge spun coming off the fourth corner and led the final 16 laps, holding off Chris Hacker for the win.

Three times this season, Marcum was either leading or battling for the win when disasters cost him a shot at victory.

The early lead was grabbed by Joe Woodring from the pole position following the inversion of the fast six qualifiers chased by Baledge, Marcum and Ronnie Rose.

Following the second caution flag on lap 12 for a spin by Orie Parkhurst, Marcum dove to the inside of both Woodring and Baledge to emerge from turn three in the lead.

Baledge took the lead on lap 19 with an inside pass of Marcum entering the third corner, but a lap later he spun in turn four and was sent to the tail of the field.

That put Marcum back on the point chased by Jack Dossey III, Hacker, Billy VanMeter and Rose.

Hacker moved into the second spot with an inside pass of Dossey coming off the second corner and started to close on Marcum on lap 23.

s rear bumper, but the veteran driver refused to surrender the low line winning by three-tenths of a second. Rose, VanMeter and Dossey III rounded out the top five.

Marcum almost experienced another night of disappointment with a slipping clutch in the late stages of the race.

“The clutch was slipping and I couldn’t get a lot of bite coming off the corners,” Marcum said in the Tim Thompson Nationwide Insurance Winner’s Circle. “

We were able to hang in there. Maybe we’ll turn things around. “We have more work to do this week,” he said.

There were five caution periods and three lead changes among four different drivers.

Rob Allman led the entire distance to record his first heat win of the year in the division.

Allman was chased by Thomas Huffard with VanMeter, Woodring and Rose rounding out the top five.

It has been 15 years since Dave Duncan won a race at Anderson Speedway, but he passed Brandon Mefford on lap three with an inside pass down the back straight to win the second heat race.

Mefford was passed by Ronnie Phipps on the next circuit and eventually drifted back outside of the top five.