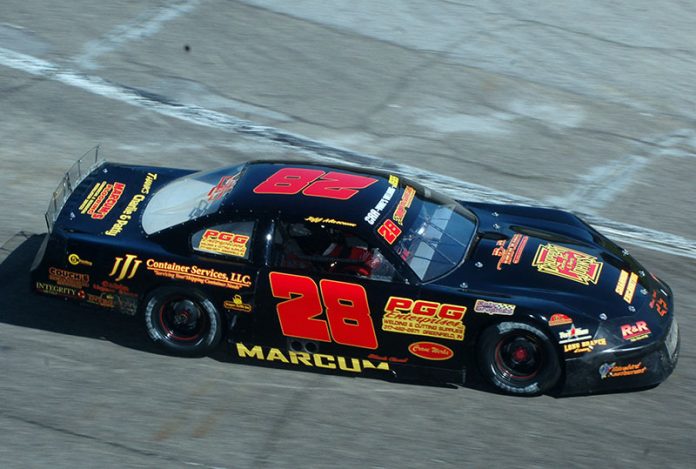 Marcum has been close to victory several times this season and took the lead on lap 20 when leader Kent Baledge spun coming off the fourth corner.

He finally visited the Tim Thompson Nationwide Insurance Winner’s Circle, besting his best finish of third during a CRA Sportsman Late Model race in May.

Marcum first took the lead from Joe Woodring on a restart on lap 13 going from third to first on the back straight.

Baledge was able to take the lead from Marcum on lap 19 with an inside pass entering turn three, but spun on the next circuit.

Chris Hacker moved into the second spot with an inside pass of Jack Dossey III coming off the second corner and was able to close to Marcum’s rear bumper.

At the checkers Marcum held off Hacker by three-tenths of a second with Ronnie Rose, Billy VanMeter and Dossey rounding out the top five.

After not competing in a NASH-FM Thunder Car feature for over two months, Trent Gossar led the entire distance to record his second victory of the year.

He was chased for most of the race by defending champion Curtis Chapman, who was unable to make a move to grab the lead.

Wyman came back from a lap two incident with Kyle Allmond on the front straight when Allmond suffered a flat right front tire coming off the fourth corner and collected Wyman.

Jerry Dane didn’t have the fastest car in the Front Wheel Drive Oval feature, but when Dylan Hoppes and Marshall Clark started battling for the second position, it was all he needed for feature win number five on the season.

Taylor Webb dominated the Tri-States Legends feature taking the lead from Eric Black on the second lap and pulling away from the rest of the field for the victory.

Webb had to survive a pair of restarts with three laps remaining when Jacob Carroll spun on the front straight. The second caution flag waved when second place running Black spun in turn four.

Webb held on to win with the fastest lap of the race with Alec Webb coming home in second followed by Gerad Miller, John Roberts and Zach Miller.

Kevin Harmon was able to get inside of Ron Phipps on lap nine to win his first Pro Compact feature of the year. Phipps held off to finish second with Jeff Williams, Randy Hoppes and
Adam Lee rounding out the top five.